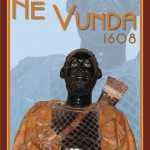 400 years ago, the first black ambassador sent to the Vatican died in Rome: he came from the Kingdom of Kongo. If you go to Rome, you must absolutely plan to go visit the Basilica of St. Mary Major (Santa Maria Maggiore). And ask to visit the grave and the statue of Nigrita. It’s a fellow! The story is little known and yet it deserves to be in the textbooks of the black continent, let alone our country.

His name was Manuel Antonio Nsaku ne Vunda, he came from the Kingdom of Kongo to represent Mani Kongo (the King) to the Pope.

NOTE: The following text is an automated translation made by Google. We are sorry we couldn’t get to have a better translation yet. Of course we encourage volunteers to contact us to help us with translations! Thanks for your patience.

A Kongo in the Vatican? Yes. The sending of an ambassador to Rome was within the context of the efforts of the king of Kongo to free his Country from the mediation of Portuguese evangelization. He wanted to come into direct contact with the Vatican. Indeed, it is by recognizing the “right of patronage” that various popes of the fifteenth century had given to Portugal and Spain the exclusive privilege of spreading the Christian faith in the land of “their discoveries and conquests” (1 ) Olivier de Bouveignes argues that the lack of patronage deprived the kingdom of Kongo missionaries he needed. Religion, as we know, entered a large part in what was described as a dynamic model to the Kingdom of Kongo. Remember that when the Portuguese reached the mouth of the Congo (Diego Cão in 1482) (2), the Kingdom of Kongo was already strongly established. This, say the historians, was a centralized State governed by a king living in the capital (Mbanza Kongo – or San Salvador). And even if its borders are considered “changing” the nucleus of the Kingdom (Nzita-NZA) is relatively stable, consisting of six provinces (Soyo Mpangu, Mpemba, Mbata, and Mbamba Nsundi), undergoing name changes depending on whether they are written by the Portuguese, the English or that they are transcribed from the pronunciation of our ancestors.

Catholic missionaries arrived in the region in 1490. And the following year, Nzinga Nkuwu King of Kongo, was baptized under the names of Ndo Nzuawu. However, the “guardian Portuguese” will move quickly to more mundane interests such as trade in slaves, gold and ivory. The missionaries generally pay in trade and politics (3).

An embassy to Rome is still considered by the Portuguese after the erection of the Diocese of Congo May 20, 1596. But the implementation of the decision is subject to delays for those who did not want a sovereign kingdom. So that it never comes up after the death of the first bishop (Portuguese) of San Salvador (May 10, 1602).

Following the recommendations of the new King of Portugal Alvaro II, in addition to the provision of obedience to the pope, Kongo’s ambassador to the Vatican had to negotiate the appointment of a new Bishop in Mbanza-Kongo and “other important issues” (4 ). Realizing this mission in an article in Italian newspaper La Repubblica celebrating the 400th anniversary of Kongo’s ambassador to the Vatican, the historian Pietro Veronese said that was also included in the diplomatic missions of the Kongo, the demand for support from the Pope to end the slave trade (5).

In fact, sending Manuel Antonio Nsaku ne Vunda not only the second attempt by the Kingdom of Kongo to be represented at the Vatican. But the first was the essentially strangers. From 1585, in fact, King (Portuguese) Alvaro I (1568-1587) was sent to Rome as his ambassador to the Portuguese Jew Duarte Lopes to expose the Pope the spiritual needs of Kongo. It was during this stay in Rome as the Portuguese ambassador to dictate Filippo Pigafetta, Italian traveler, stories that will make up no later than his famous book The Kingdom of Kongo and surrounding countries (1591).

ut the successor of King Alvaro II of Portugal (1587-1614), not quite satisfied with the first mission, decides to “Africanization” in 1604 a project that also met the wishes pressing the Pope (Clement VIII – 1592-1605 ). He called for sending to Rome of the first African ambassador to the Vatican in the absolute, son of the soil Kongo. It will be “Dom” Manuel Antonio Nsaku ne Vunda.

Ambassador reached Lisbon in 1605 after a very difficult journey in which we Bontink information, he “fell three times in the hands of pirates who stripped Dutch gifts for the pope.” Lisbon, he wins Madrid. Here, as elsewhere in Lisbon earlier, it does everything to discourage him from going to Rome. “It appears that the court of Madrid saw the evil eye projects Alvaro II she looked more or less as a vassal. The intention of the Congolese king put himself under the papal protection owed much to please him, “said Bontinck. But the enthusiasm of our diplomat is boosted by a letter from Pope Paul V (1605-1621), successor of Clement VIII, 10 December 1606, looked forward to his arrival in Lisbon and hopes to receive it quickly person in Rome (see Bontinck, p. 121).

Yet no Nsaku Vunda will take his troubles patiently for nearly one year after the invitation, in October 1607, he may leave Madrid, together with the “nonce Mellini, who created Cardinal September 10, 1606, was going to receive the cardinal’s hat from the hands of the Pope “(Bontinck, p. 121). The ambassador became ill on the way (is it poisonous?), The pope immediately sends doctors to Civitavecchia, a port located about sixty miles from Rome. The pope’s own brothers, Francois and Jean-Baptiste, and his nephew Cardinal Scipione Borghese, went to meet the ambassador to welcome him to Rome. Orders were given to welcome him with honor. “The Pope adds Bontinck, wanted to stay at the Vatican, in the apartments formerly occupied by Cardinal Bellarmine.” Preparations for the hearing of the presentation of credentials of new Ambassador engaged right away.

The Sacred Congregation of Rites decreed that the formal hearing, at which would take the oath of obedience and the presentation of credentials, would be in the “Sala Regia,” as was the custom – and as always use today in the Vatican – for audiences granted to the kings or their representatives. Spain protested in vain the glories that were preparing, alleging that the Kongo kingdom was not an independent but dependent on the Crown of Spain.

The solemn entry – usually a splendid procession – was to be the day of Epiphany (January 6, 1608). And to mark all the glory he meant to give the event, the pope decided the striking of a special medal to honor the ambassador after the ceremony. In this atmosphere that Dom Manuel Antonio Nsaku ne Vunda, Ambassador Plenipotentiary of the Kingdom of Kongo in the Vatican, arrived in Rome January 3, 1608, but it is always sick. Pope Paul V increases the attention to her and visits her in person. But January 6, 1608, the feast of the Epiphany Catholic, Ambassador Manuel Antonio Nsaku ne Vunda not die in peace, causing a great stir in the Vatican. Sign of the affliction of Pope Paul V asked to be buried this worthy son of Africa in the Basilica of Santa Maria Maggiore which the court of Spain was the protector.

Even today you can visit this church, located near the central Termini station in Rome, the Ambassador Kongo bust created by artist Francisco Caporale. And a mausoleum designed by Bernini remember the mission and the death of Ambassador in the baptism of the Basilica Santa Maria Maggiore. And “a few steps in the Borghese chapel in the same basilica of Santa Maria Maggiore, we find again Bontinck information, a text that relates to the Embassy of Emmanuel Antoine, alias Dom Manuel Antonio Nsaku ne Vunda . On the tomb of Paul V grand bas-relief represents the reception of a Persian embassy by the Pope in 1609, but in the inscription, it also alludes to a Congolese embassy and Japanese … “(p. 126, note 14 ).

Finally another memory marks the arrival of the Ambassador of Congo to the Vatican: “When he painted in the Vatican Library, the most remarkable facts of his reign, Pope Paul V ordered in front of the murals that reproduce Canonization of St. Frances of Rome and St. Charles Borromeo, another mural should represent his visit to the Ambassador Black moribund. One can still admire the wide corridor of the Vatican Museum, which leads to the Sistine Chapel “(Bontinck, p. 126).

According to Richard Gray, the ambassador was “a man in his thirties, was described by those in Rome saw him as someone” with noble manners, pious and devout, as with energy and prudence in diplomacy ‘”(p. 147) (6).

While in the diaspora in Europe on the 400th anniversary of the death of Manuel Antonio Nsaku ne Vunda went unnoticed, commemorations were held in Brazzaville, Kinshasa and Angola.

In addition, as part of the “Decade Kimpa Mvita Mama” and to honor the 400th anniversary of the Mission  Nsaku ne Vunda the Vatican, the General Coordination of the Association Tricontinental Kongo Malaki my plans to organize a pilgrimage to the Heart of Africa for the reconciliation of East Africans and West Atlantic. This pilgrimage will begin at the door of no return of the Island of Goree, will continue in Accra (Ghana), Cotonou (Benin) and in both Congo and stabilized in Mbanza Kongo. It will be attended by Kongo from Venezuela and the City Council of Musundi Cuba and Associations Kongo Malaki my French Guiana, Guadeloupe, Haiti and Santo Domingo. The pilgrimage will culminate with the holding for the first time in Mbanza-Kongo (capital of Kongo Kingdom) Edition of the Festival my Kongo Malaki, the XVII.

1. (See JE Martins Terra, “the Portuguese patronage” in Communio, No. 4, 1992).
2. The history books speak falsely “discover the Kongo Kingdom”, as if its inhabitants did not exist before the arrival of Westerners!
3. Read about it the unfinished work of the great Raphael Batsîkama Nduala ba.
4. (See F. Bontinck, “The funeral monument of” Antonius Nigrita “in Rome, in Journal of African Clergy, 1951).